Mark began his quest to make accurate animal skin spheres in the early 1990’s with a Bengal Tiger and Leopard pelt that were owned by a friend.  The initial development of the first two spheres took years from idea to fruition.  Mark acquired new animal skin research material in 1997 when he was allowed access to the Smithsonian Museum of Natural History to photograph pelts.  The most recent research material was obtained from The Museum of Comparative Zoology at Harvard University.

Selected photographic images are painstakingly distilled into black and white patterns and transferred to masking material.  The masking material is applied to a previously constructed, cylindrical, multi-layered glass blank and then sandblasted.  The masking retains the outer color and allows the sand to cut into the glass to reveal the layer of the colors beneath the surface.  The cameo-like blank is then reheated and encased in clear glass before it is formed into a sphere.  This technique was derived from a process called graal, developed by Simon Gate in 1919 at the Orrefors Glasshouse in Sweden.

The volume of the sphere relates directly to the weight of each species.  Giraffe spheres are 6" in diameter, Bengal Tigers are 3" and Servals are the smallest at 1 5/16 ". Currently Mark has 19 different species resolved and continues development of new species. 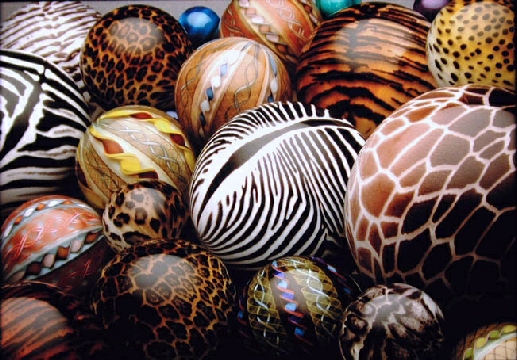